July, formerly S Kamja, is a RuneScape player who is known for writing The History of RuneScape, which is a PDF documentary (422 pages) about the non-lore history and development of RuneScape. Shortly after its release on 26th July 2015[1], the PDF was mentioned in the gaming magazines Massively Overpowered[2] and PlayNation Germany.[3] While writing the documentary, July received help from several notable people, including Andrew Gower, Rab, Suomi and RuneScape’s High-Level Forum community.[4] July had been working on the PDF since 2011, which is when he posted a precursor of the PDF on the RuneScape forums.[4] Prior to writing about the history of RuneScape, July was a skiller who maxed his total level for the first time in March 2011, with his most notable achievement holding rank 12 in Agility in 2009 and 2010.[5] July quit playing RuneScape in 2015, three months after releasing the PDF.[6]

The History of RuneScape

Note: This section is based on information from the PDF’s preface.

The History of RuneScape describes in great detail many facets of the game's development and the growth of the RuneScape community. The PDF’s contents page currently lists the following chapters[4] (page numbers between brackets):

Notable features include a detailed preface in which the process of writing the PDF in the years leading up to its release is described, a detailed description of some of the main PvP clan wars since 2001, a chapter about famous players and the creators of RuneScape, and a chapter about RuneScape nostalgia that links to several YouTube videos. The documentary also contains over 200 authentic screenshots and 125 videos integrated from YouTube.

July's fascination with the history of RuneScape began early in 2010 after his best friend, The Pain105, had been sharing his adventures as a veteran player. July decided that he wanted to learn everything about the history of RuneScape and to use that information to teach the community about the olden days, with as main intention to make the community aware of why the game is what it is today and how the present came to be. For that, he turned to the RuneScape forums:

After posting a six-page long thread about the history of the game at the beginning of 2011, July decided to make a second, more accurate and more complete version of the history thread; RuneScape History V2, as the thread was called, was posted in May of 2011 and counted 39 pages. The thread became a hot topic (see gallery) and was stickied in the General forum for a week. July had changed his name to Fair Player at that point. To this day, it is still longest thread that was ever posted on the RuneScape forums.

In the next years, July combined playing RuneScape with writing what would eventually become the PDF, released on 26th July 2015 as The History of RuneScape. Within two weeks after the public release, the PDF had been read by 10k unique readers (based on IP), after having been retweeted by 50+ Twitter users[7], including Andrew Gower.[1] The first edition of the PDF initially counted 324 pages.[2] This changed on 26th March 2016 when July released the second edition, with the main change consisting of the addition of 124 videos.[8]

In November 2016, after several requests from other players, July began making educational videos about the history and development of RuneScape to go along with the PDF. His YouTube channel was introduced with a timeline video of 50 minutes about Andrew Gower’s time at Jagex, which was later shared on the official Facebook and Twitter pages of RuneScape[9] and generated overwhelmingly positive feedback in the comments section on YouTube.[10] July’s YouTube channel is currently promoted in a pinned comment in the comment section of Jagex’s own documentary film about RuneScape.[11]

July reached his first 99 on 15th March 2008 and maxed his total level exactly three years later, on 15th March 2011, by levelling ten skills to 99. During that period, he focused on the skills that were by many regarded as “hard”, such as Agility, Hunter and Runecrafting. For example, in 2009, he entered the front page of the Agility hiscores for the first time and stayed there for more than a year, with rank 12 being the highest rank that he managed to attain.[5]

During the same period, July was prominently involved in the high-level skilling clan world: July was one of the skillers who contributed to the 2010 Jagex Skilling Cup victory of the highly successful clan Divination.[12] A year later, July led the Jagex Skilling Cup for the clan Divine Skillers (a spin-off of Divination). During that 2011 edition of the Jagex Skilling Cup, July achieved the highest individual score in the Agility competition, with an average of 74,679 xp per hour (see gallery). He stayed in Divine Skillers until the clan disbanded shortly after the release of Old School RuneScape in 2013.

For a long time, July was mainly interested in the traditional highly click-intensive skilling methods. For example, his favourite skill has always been Agility, for which he obtained the Master Cape during the summer of 2014[13] by training at the Advanced Barbarian Course, without using bonus xp or Silverhawk feathers. Other activities that he likes include C2 Fishing, Elf City Thieving, Graahk Runecrafting and Pyramid Plunder. During his RuneScape journey, July achieved several xp records by using highly click-intensive methods, and that without using any type of bonus xp:

-September 2008: First player to gain 5m Prayer xp in one day[14] without help from other players. He achieved this by using dragon bones at the gilded altar before there was an x-option.

-March 2009: First player to gain 2.7m Woodcutting xp in one day (see gallery). He achieved this by chopping teak trees.

-June 2012: One of the first players (perhaps the first player) to gain almost 2.8m Fishing xp in one day[15] without any form of bonus xp (see gallery). He achieved this by C2 Fishing. 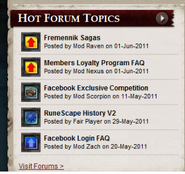 Retrieved from "https://rsplayers.fandom.com/wiki/July?oldid=89779"
Community content is available under CC-BY-SA unless otherwise noted.