Lib Tech is a RuneScape player known for having 200 million XP in all skills. As of March 2018, he is rank 6 overall on the Hiscores. 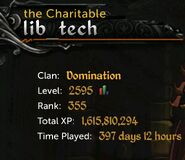 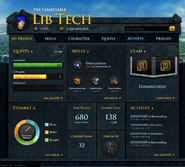 Dates for achieving level 99 in skills. (Some are inaccurate)

Retrieved from "https://rsplayers.fandom.com/wiki/Lib_Tech?oldid=90290"
Community content is available under CC-BY-SA unless otherwise noted.