Medieval-Kid is a RuneScape player who has been playing since 2002. He began his adventure in F2P and has continued to play as a free player to the present day. His favorite skills were Woodcutting and Firemaking (at the time of the original writing of this paragraph), but isn't shown in his skill experience as of late due to a boost in his Smithing and Cooking skill in an attempt to raise total exp. He currently has more than 810M total experience, lvl 99 in all F2P skills and 110 Dungeoneering which he is currently training to level 120.

Ranked in the top 40 top 250 F2P players, Medieval Kid held a total level of over 1569. Medievel Kid is currently a member of the clan TFS (Total F2P Skillers) and HcGc.

In recent days Medieval-Kid has enjoyed spending his time taking long strolls at Mud-Skipper's Point, frolicking in the wheat fields West of Draynor Village, and High Alchemizing on Wall St. (The Grand Exchange).

Though, in all sincerity, Medieval-Kid has been ardently working on maxing out his F2P stats at 99 (With Dungeoneering on the back burner for its impending goal of 120). 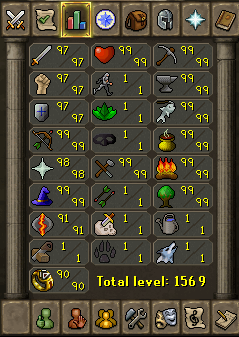 Retrieved from "https://rsplayers.fandom.com/wiki/Medieval_Kid?oldid=77954"
Community content is available under CC-BY-SA unless otherwise noted.