Mod Reach was a Jagex Moderator who used to work in the RuneScape QA dept. He moved to Old School RuneScape to become a QA tester, later becoming a content developer for Old School. On April 21, 2015, Mod Reach was "dismissed from employment at Jagex, following an investigation into serious misuse of moderator privileges."[1] In addition, his maxed personal account Mad Dan was banned.

Reach was well known at Jagex HQ for his flexibility in the workplace.

It was suspected that he may have played a role in the "corp glitch" which allowed players to be invincible at the Corporeal Beast as it would not attack them back. However, Mod Mat K later stated on Reddit that Mod Reach had nothing to do with the Corporeal Beast bug.[2] 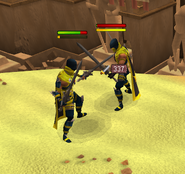 Retrieved from "https://rsplayers.fandom.com/wiki/Mod_Reach?oldid=89889"
Community content is available under CC-BY-SA unless otherwise noted.