Most Dreaded was a Free-to-play Ranged / 2h pure, one of the best known for his 5 pking videos that were released between 2006 and 2008. Most Dreaded's 5th video is currently the most viewed Free-to-play pking video with over 200,000 views. He also has over 1600 subscribers as of August 2012.

Most Dreaded's final video entitled 'Final Breath' was released on March 18th 2008 and containes some of his last clips before the decision by jagex to close the wilderness on December 10th 2007. Shortly after the release of his final video he offically anounced his retirement from the game.

"I have retired from RuneScape as I feel it's time to move on from the game, and I can assure you that I will not play again. To make it clear, the wilderness update is not what has forced me to quit. Good luck to all upcoming pures and have fun watching my vids. Most Dreaded, the account itself, will not be given away. I will leave it be, so please don't ask, thank-you." 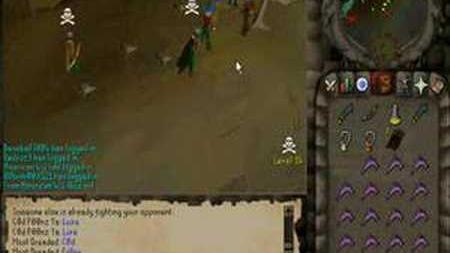 Contrary to popular belief Most Dreaded only has 5 pk videos but they are numbered 5 through 9, whether this was just a tactic to increase views or his other 4 videos were somehow deleted from existence is not known.

Most Dreaded's final stats are not visible after the 22nd November 2011 update to make high scores a members only function. His most recent know stats are 40 Attack 85 Strength 85 Range 44 Prayer 61 Magic 81 Hitpoints and 2 Defense, these stats were taken off of his last video. When asked about his 2 Defense in an interview he replied "i don't quite remember how i got it, but i'm sure there was lag involved".

Most Deaded has the most video views of any pure F2P pker in runescape history with 655,000 and counting. His 5th video has over 200,000 views while his 8th video has over 180,000 views. He is highly regarded as one of the most influential F2P pures ever to play the game.

Retrieved from "https://rsplayers.fandom.com/wiki/Most_Dreaded?oldid=64824"
Community content is available under CC-BY-SA unless otherwise noted.