Prezleek is a female American player best known for her original and talented Runescape comic series about her character. She started playing in April 2005, and is still active to this day.

Many people mistake Prezleek for being male, due to her character being male. This is because she intentionally created a male character on account creation because she was worried about people being unkind towards her for being a girl gamer.

Prezleek is also a member of the clan RS Outreach, a community-based clan that has over 350 members. Prezleek is an Organiser in this clan, and has gained 525 million experience since joining it.

During both Runefest 2015 and Runefest 2016, Prezleek was awarded the golden gnome for best artist and best comic respectively.

In real life, Prezleek is a full-time student at a university, majoring in Microbiology. She lives in California, United States. She also has two dogs, which she shows images of frequently on Twitter.

The majority of her Runescape works involve her character participating in various activities around Runescape. Her male cartoon character's appearance is depicted as having a large nose, wearing a trimmed Prayer Skillcape, a Helm of Neitizot, blue pants, and a grey shirt. The cartoon character is also seen as being rather clumsy and having very bad luck, which results in accidents and misfortunes happening in the comics. Prezleek has a self-admitted love of the Pack Yak, who appears as a frequent reoccurring character in her cartoons, and is often called "Baroo".

Appearance as an NPC

On April 24, 2017, Prezleek was added in-game on RuneScape 3 for the Spring Fayre event. The NPC hosted an activity at the event called the "Bucking Baroo." Prezleek's NPC also Yak-themed prizes, such as the Yak Balloon token and the Yak Plushie token.

On September 3, 2018, Prezleek was added in-game for the new player-owned farm Farming update. Prezleek's acts as a yak trader and buys yaks from players. 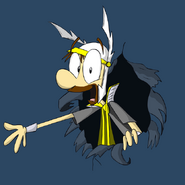 Jagex spoof appearing in-game
Add a photo to this gallery

Prezleek on the Runescape Hiscores

Retrieved from "https://rsplayers.fandom.com/wiki/Prezleek?oldid=90681"
Community content is available under CC-BY-SA unless otherwise noted.