Sick Mic is a Belgian Runescape player that was listed at the top-100 for several years. He was well known in the Dutch and Belgian Runescape communities for being a high ranked and high level player. He gained a lot of popularity during the year 2006, when he maxed several skills in quick succession. At the time, this was an impressive feat as EXP rates were a lot slower than what they are now. A possible second reason for his popularity was the convoluted story regarding his Party Hats that were taken from him in March 2006.

Sick Mic started playing RuneScape Classic in 2001 under a different name. He forgot about the game but returned in 2002 to create a new account, Sick Mic.

On March 15, 2006, Sick Mic's yellow and green party hats were scammed by his long-time friend, Tim. This happened because Tim's girlfriend was planning to quit the game due to real world issues, and asked Sick Mic to let her borrow his partyhats for a few screenshots before she quit. After around 20 minutes after giving her the Partyhats, Sick Mic asked for them back and her account logged out. As time went on, suspicion began to arise over Tim's involvement in the scam, as he posted screenshots offsite of his account with the partyhats. As it turned out, Tim's girlfriend never existed, and was in fact an alt account that Tim used to scam Sick Mic. When accused of the scam, Tim admitted to it, and returned one of the partyhats, claiming he had lost the other one. 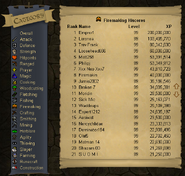 Sick Mic and Enrix E B

Sick Mic and N0valyfe
Add a photo to this gallery
Retrieved from "https://rsplayers.fandom.com/wiki/Sick_Mic?oldid=85302"
Community content is available under CC-BY-SA unless otherwise noted.