The Stuff is an active player of RuneScape. He is ranked around #50,000 overall on the hiscores, with a total of 177,038,880 experience. He has achieved seven 99s: Woodcutting, Fletching, Strength, Prayer, Herblore, Attack, and Constitution in that order. The Stuff is a devout follower of Guthix's teachings. He is currently in the Godless faction, but chooses to side with the Guthixians when given the option to do so.

The Stuff, otherwise known by his real name, Pedro, started playing RuneScape in the fourth grade in 2005. He heard about it from a fellow classmate who recommended the game to his entire class. The customisation, competition between friends, quests, armor, and medieval theme of the game led to RuneScape being his favorite childhood pastime. By late 2008, most of his friends had quit the game for unknown reasons, leading to his own hiatus for about a year. One of his friends still played actively, and got Pedro back into the game after that.

At the age of 13, he started setting long-term goals, such as 99 Woodcutting, all skills to 60 or 70, etc. He stopped playing numerous times. However, at around the time Pedro was going to be a senior in high school, EoC was going to be released, and Pedro decided to start playing again. Soon after his return, The Stuff would meet Akihisa-Kun at the Battle of Lumbridge, who invited him to the clan "Redux".

The following is lore told personally by The Stuff himself that he has created, and is in no way affiliated with the official lore of RuneScape released by Jagex.

The Stuff had been Guthixian long before Guthix's death. He had read through the quest dialogues, and read information about Guthix's teachings on the Runescape Wiki. This caused him to become a devout follower of Guthix, as the way of Balance intrigued him more than any other. The Stuff's favorite color even became green after that.

He also applied Balance in real life, not as an absolute, but only as an experiment. He was always the good, innocent kid, but after learning of Guthix's teachings, he decided to introduce a darker side of his personality to the world. The part of him that simply didn't care for many things, including what people thought of him, religion, and such things. The Stuff found this philosophy to be rewarding, as it helped him to become more of an outgoing person, and be more confident about himself.

When The Stuff heard about Guthix's death, he was in a state of disbelief. He could barely believe Jagex even revealed Guthix in a quest, let alone kill him. The World Wakes sparked a huge interest in the The Stuff's eyes, and ever since then he has always been updating himself on the newest content and lore.

The Stuff achieving 99 Attack by defeating a Saradomin Colossus with a Viridian Balmung. 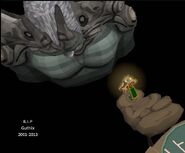 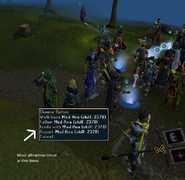 The Stuff posing with Mod Ana on the Divination release date.

The Stuff achieving 99 Constitution on waterfiends.
Community content is available under CC-BY-SA unless otherwise noted.
Advertisement