Not to be confused with Uloveme

The display name itself that once was ranked #2 for many years on the Hiscores was released from the banned owner, and now in use with a Different player that claims she will do better than the original owner.

Over time.. When playing a game for so long. You can almost get sucked into something that is too the extreme, being younger at the time..you cling on too someone who was once your favorite player. Pre-RS3 Uloveme, Had a total level of 2.349. And a whopping 1.010,449,068. With a Summoning Level left at 72. before she was Perm Banned. Second player ever to have the total Exp at that time.. Sometime after what happend, a new player obtained her name. And begin a Journey that was not her own..unknowingly understanding what she got into even if she was just a friend..

Uloveme (rs3) and Uloveme Pre-Rs3 are in fact different. One is the currently EOC/Rs3 player. While the other is Pre-EOC/rs3 Era, and banned currently..

The Current Uloveme (EOC/Rs3) noted on her site. She tried to fill the shoes the original once had, but over time she realized those shoe's are not her's too fill. But in fact too walk her own path and fill her own shoe's and do better than the Original. Uloveme (rs3 version) claim's her goal, is to set out and be Different from a regular player. And said "Take the torch and be the role-model As the original once was. When someone tells you "No" .. You should hear "yes". Impossible is a word i love to ignore.The only way to make the possible-possible, is too try the impossible. If you fail? So what. Thats what everyone expects. But..if you succeed, you make the world a much better place. Never follow the crowd..Go where its empty..Be different..Ignore the Naysayers."

Uloveme Currently lives in world 14. And love's too make outfit's and update her site. She also noted "Nova", her favorite pet, is named strictly after N0valyfe, a former retired top ranked player year's ago. 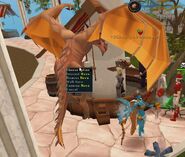 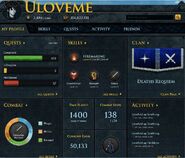 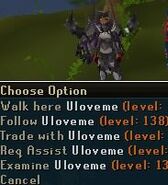 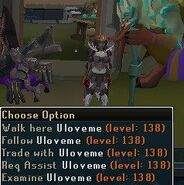 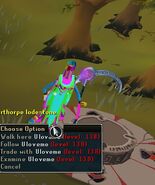 Add a photo to this gallery

Retrieved from "https://rsplayers.fandom.com/wiki/Uloveme_(Rs3)?oldid=89273"
Community content is available under CC-BY-SA unless otherwise noted.